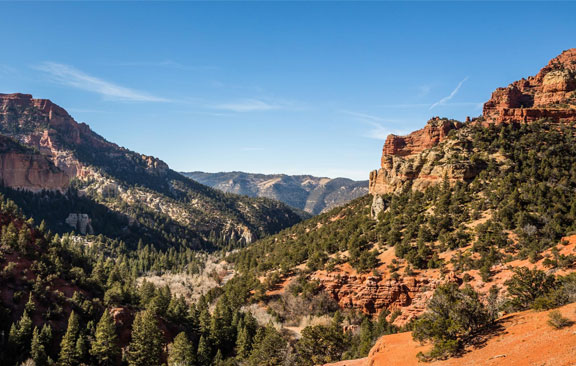 At more than a mile in elevation (yes, higher than Denver!), Cedar City is a microcosm of all the best parts of Utah life. Cedar City has been inhabited for thousands of years, but modern-day Cedar City was founded in 1851 by Mormon pioneers migrating south. The city was largely supported by iron mining for many decades following its founding. Today, the city has grown to a population of roughly 30,000 people and is a well-known tourism destination.

This iconic town is known as a “Gateway to the National Parks” due to its proximity to both Bryce Canyon and Zion National Park, but the opportunities for outdoor adventure don’t stop there. Cedar City is near Brian Head Ski Resort and a national forest, so residents have plenty of opportunities to get outside year-round.

Cedar City is also a haven for the arts. Home to Southern Utah University’s renowned arts program, residents can also enjoy (or participate in!) the Utah Shakespeare Festival, the Simon Fest Theatre Co., and the Utah Summer Games. Favorite attractions include the Southern Utah Art Museum and the many cultural festivals that happen throughout the year. In fact, Cedar City is sometimes referred to as Festival City because there is always something going on!

Getting Rid of Pests and Vermin in Cedar City

The very same warm temperatures that bring so many people to Southern Utah also bring pests inside. Driven by a desire to escape the heat and direct sunlight, spiders, mice, and other pests are always looking for ways to get inside homes to access the shade and moisture that’s inside. These insects and animals are skilled at hiding. Even if you know they’re there, finding and dismantling their nests can be extremely difficult.

Wasps and hornets, identifiable by their black bodies with yellow or white markings, can turn aggressive when threatened and inflict a painful sting, or sometimes multiple. These flying insects like to nest on home exteriors and in yards, but DIY removal attempts are often ineffective. Keep your family and pets safe by enlisting our professional wasp control services in Cedar City.

Spiders are common invaders of Cedar City homes and can be annoying, frightening, and dangerous to residents who come into contact with them. Common types of spiders in the Cedar City area include cellar spiders or “daddy longlegs” with small bodies and long spindly legs, and wolf spiders, which can be identified by their brown hairy bodies and tendency to chase down intruders—sometimes resulting in painful bites. Although you’re less likely to see them, black widows and golden orb spiders also make Cedar City their home.

Boxelder bugs are common in Utah and can be distinguished from other insects by their black bodies and reddish-orange markings on their backs. They tend to mind their own business in the summer, but in the fall and winter may try to move into your home through cracks and crevices as they seek out warmth. Although they’re not dangerous, box elder bug bites can irritate the skin, and the bugs can produce an unpleasant odor after dying. Professional pest control services can help you eliminate this problem.

Nature’s Gate Pest Control is highly experienced with every kind of pest found in Southern Utah. We use eco-friendly methods to give you long-lasting pest removal results without sacrificing the health of your family, pets, or environment. We provide the best pest control Cedar City has to offer!

If you’re seeing signs of a pest infestation on your Cedar City property, give us a call today to see how we can help.